The Top Searched Houseplants in the U.S. 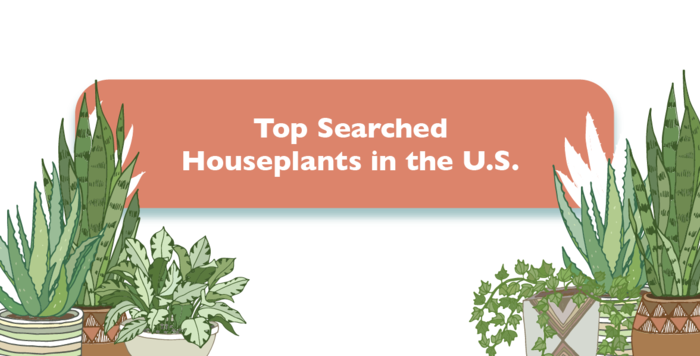 Since quarantine started in the spring, it’s been the best time to pick up gardening as a hobby. As such, we decided to look at the top-searched houseplants in each state to see how the interest in plants varies. We also took a look at how they’ve changed over time.

To find out which houseplants are the most popular and how that popularity has changed over time, we used Google Trends to look for the top searched houseplants by state over the last 12 months and also over the last five years. Keep reading to learn the results – they might surprise you. 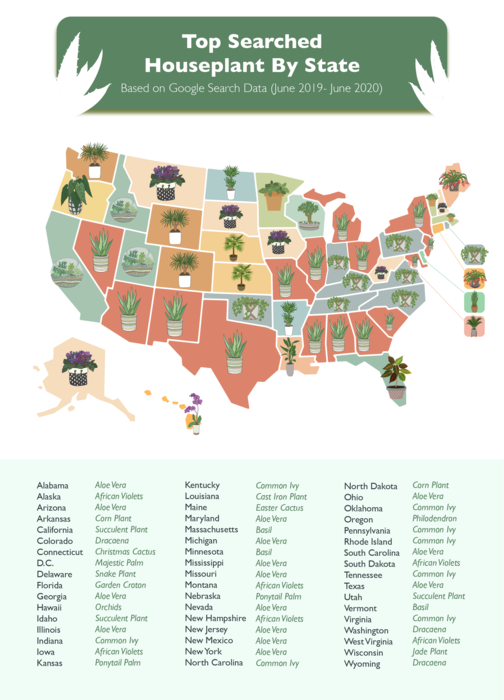 For a lot of individual states, there wasn’t too much variation between 1 year of search volume and 5 years of search volume. But, overall, there was quite a bit of change over 5 years. Aloe Vera was still very popular, but Chinese Evergreens and Majestic Palms cracked the top 5. 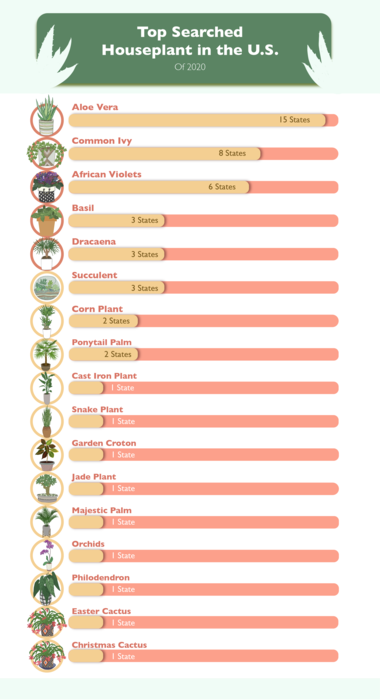 Aloe Vera has been the most popular plant over the past 12 months by a landslide. Fifteen states have Aloe Vera as their top-searched plant, followed by Common Ivy in 8 states, and African Violets in 6 states. As of the latest search volume, these are the plants that are most popular with people looking to spruce up their homes.

To absolutely no one’s surprise, Aloe Vera tops both lists with an astounding 15 states searching for this plant the most in the last year and 14 states in the last five years. Clearly, this plant’s medicinal properties and aesthetics are making it America’s most consistently popular houseplant.

The rest of the data, however, tells a very different story. While Americans’ interest in Aloe Vera has stayed consistent, other houseplants come and go. Of the top five most popular houseplants of the last year and last five years, three out of five are the same across both lists. However, if you look at the popularity across states, you’ll start to see some interesting results.

Let’s start with Common Ivy. Over the last year, it was the second-most popular plant, getting the most searches in eight states. But, if you look at the last five years, its popularity drops significantly, from eight states to just four. And from second place to third.

The same can be said for African Violets. Over the last 12 months, African Violets were the third-most searched houseplant, ranking as the most popular in six states. Zoom out to the last five years, however, and that number drops to just three states, landing African Violets in a tie with Basil for the top five.

One of the starkest differences between the two lists is Dracaena. Recently, this ornamental houseplant has shot up “most popular” lists. When looking at the most-searched houseplant by state over the last five years, Dracaena doesn’t even make the list. Fast forward to just last year, and it’s sharing fourth place with Basil and Succulents, now the most popular plant in three states.

In a similar vein, the succulent plant has gained popularity among Americans. Data over the last five years reveals that it was the most-searched plant in California. In the last year, Idaho and Utah have joined the party, moving this low-maintenance houseplant to fourth place on the list.

However, not all plants are receiving the same love as Succulents and Dracaena. Majestic Palms have lost popularity. Over the last five years, it was the most-searched plant in four states, tying with Common Ivy as the third most popular houseplant. Now, only Delaware considers the Majestic Palm worthy of attention.

Other plants that are no longer feeling the love include Bromeliads, Calatheas, Umbrella Plant, Fiddle-leaf Fig, Jasmine, and Lucky Bamboo. While they’ve fallen off the list, they were never incredibly popular, to begin with – all these plants were the most searched in only one state each over the last five years.

No matter where your plant affinity lies or whether your favorite plant is most popular in your state or not, you can never go wrong with any of the houseplants mentioned above. And while you’re busy sprucing up your home with your state’s favorite plant, why not spruce up your space with quality LED lighting that won’t break your budget? Adding crisp and clear LED lighting can easily alter the mood and appearance of any room, bringing out the true colors of everything underneath it, without the expensive remodel. At e-conolight, we have all of the tools you need to make your home look great.