Increasing the energy efficiency in your home doesn’t mean sacrificing high style or breaking the bank. The evolution and increasing familiarity of LED lighting over the last several years means homeowners can swap their traditional lighting schemes indoor and out for brighter light at bigger savings. 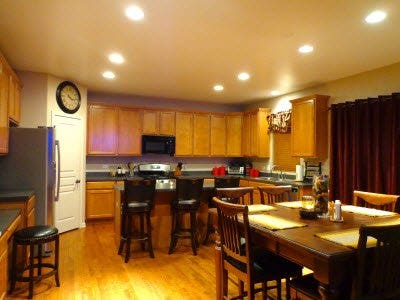 Recessed lighting took kitchen design by storm a few years ago, but recent regulations that limit the manufacture and  importing of incandescent bulbs mean the change to more efficient lighting will happen sooner rather than later. New 14W LED recessed retrofit kits offered by e-conolight make the transition smooth because they fit into most existing 5” and 6” recessed housings. Kits include a long-lasting LED lamp that provides bright light at considerable savings.

Track lighting has also come a long way since the chunky units of the 1970s. From high-style residential track heads with an industrial twist to sleek units that fit in nicely with almost any décor, LED track lights offered by e-conolight deliver bright light, true colors and keep a low profile. Homeowners can highlight architectural details, spotlight great pieces of art or use the new track lighting for general illumination instead of traditional ceiling-mount fixtures and/or table lamps.

Brighten up basements without the headache of replacing existing T-bar ceiling structures with drop-in LED troffers, now in a convenient 1x4 size at e-conolight.com. Because LED troffers can be up to 70 percent brighter and use less energy than fluorescent tubes, fewer fixtures are needed overall. Homeowners end up saving time and money.

Saving money with more efficient LED lighting isn’t limited to indoor ideas. Homeowners can light up walkways, create the perfect backdrop for enjoying an evening outside, highlight landscaping and more.

LED wall packs offered by e-conolight are ideal lighting fixtures for exterior walls on both homes and garages. Some models include a cutoff glare shield to direct light down to the ground, where it’s needed. They can also throw light to both sides, increasing visibility along driveways and walkways with minimal glare, which is important to help keep the peace with neighbors. 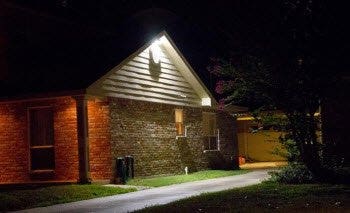 Backyard decks can be fantastic entertainment spaces, but the fun shouldn’t be limited to daytime because homeowners are afraid of attracting bugs if they install lights. LED flexible strip lighting is the ideal solution because the strips are flexible and fit nicely underneath top rails. LED strips are also completely sealed, and, unlike traditional bulbs, LED lighting doesn’t attract bugs so the party doesn’t have to move inside after the sun goes down.

Curb appeal doesn’t need to fade into the shadows at nightfall. LED decorative sconces from e-conolight.com shine light up, down or in both directions and highlight pretty features in the yard and nice architectural touches at the same time. Homeowners who want to add a little more style to walkway lighting and entryways will find that sconces are an attractive and energy cost saving way to go.