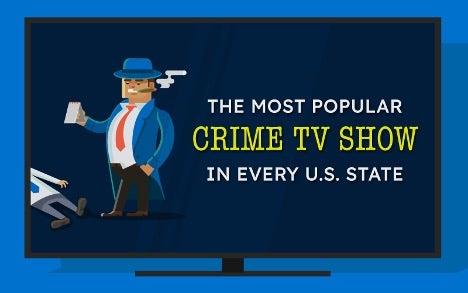 Lights out, it’s time to dust off your detective hats and grab some popcorn because today we’re talking about the television genre that we can’t get enough of: crime. When it comes to entertainment, it’s clear that crime shows are in the league of their own. From ‘Law & Order’ that first aired in 1990 to the Netflix hit of 2018 ‘You’, crime-centric television has been a fan favorite for much of history.

At e-conolight, as much as we love the light, we know that the darkness can produce irresistible entertainment. That got us thinking, which top crime TV shows are the most popular across the United States? Are the classic series still America’s favorite, or have the latest iterations stolen the hearts of the nation?

The Most Popular Crime TV Show in Every State

Our data reveals that selecting which crime TV show to binge-watch is a hard decision. Across the nation, there are 32 different shows represented as a favorite crime show in at least one U.S. state.

Some of the geographical trends come as no surprise. For example, ‘Law & Order: SVU’, following the New York City Police Department, is a fan favorite for locals in New York. The show is also filmed in NYC, meaning many viewers may love watching to get a glimpse of their own stomping grounds. This series is also the most popular in nearby northeastern states, Connecticut and Maryland.

On the other hand, there were a few unexpected winners in the mix. ‘Criminal Minds’—the series that won out five states in the Eastern half of the country—didn’t claim victory in the Eastern state it’s based out of, Georgia. Instead, ‘How to Get Away with Murder’, set in Philadelphia, took the title in the peach state. 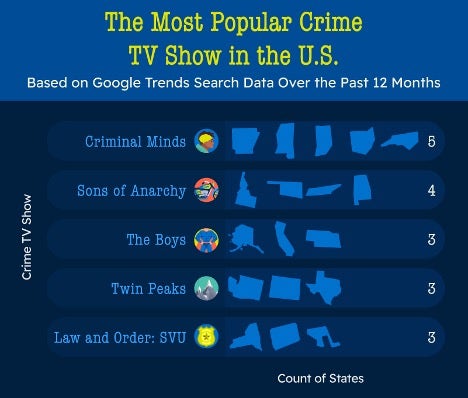 Zooming out a bit, we can narrow our watch list from 32 to five when looking at the most popular crime TV shows in the nation overall. Based on search volume, ‘Criminal Minds’ reigns supreme—which might explain the long run this show had of 15 seasons. While the final episode aired in February of 2020, fans can look forward to the reboot currently in production for Paramount+.

‘Sons of Anarchy’ was close behind the race to first place, coming on top in four states across the country. The series covers everything from drugs to illegal arms while following the lives of American bikers. It ran for 92 episodes across seven seasons, with the finale airing in December of 2014.

Not all of the shows on this list share a similar history, ‘The Boys’, which is competitive with the long-running classics, took third place after only airing in 2019. Similarly, ‘Twin Peaks’ aired just 48 episodes between 1990 and 1991, but clearly made a substantial impact on fans in the U.S.

So if you were on the fence about what to watch tonight, maybe kick back with your state’s favorite crime series. What better way to destress than to channel your investigative side and solve the hard-hitting crimes of Hollywood?

While these scripts are typically based on nothing but fiction, we don’t blame you if all the crime-talk gets you a little uneasy. At e-conolight, we know that the best way to combat the nerves is keeping your house well lit and secure—check out our outdoor & indoor lighting and security products for ultimate protection.